Manas National Park gives tourists chance to see the face of the earth before human existence.

Previously called North Kamrup, Manas had parts designated as reserved forests in 1907 and 1927. It was officially declared a sanctuary in October 1928. From April 1973, it formed the core of Manas Tiger Reserve and in 1985, attained the status as UNESCO World Heritage Site, called the Manas Sanctuary. It was upgraded to the status of a national park in September 1990. The park area was also expanded to include Kahitama Forest reserves in the east. It is now currently placed on the List of World Heritage in Danger from 1992 due to unrest factors and infrastructural damage. 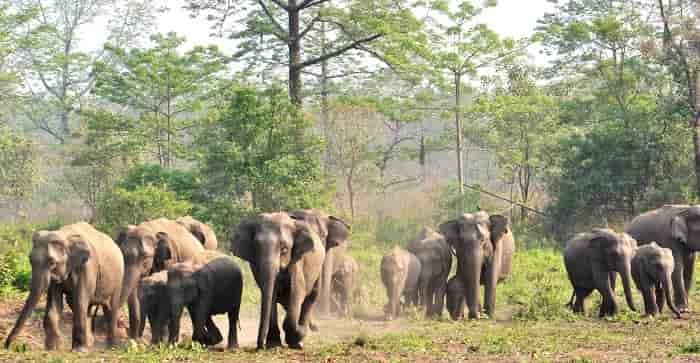 Staying true to the philosophy of eco-tourism, Manas National Park has minimal tourist facilities while offering a treasure of wildlife, rich biospheres and pristine landscape to enthrall all visitors. The primary focus is to provide a safe haven for the exotic flora and fauna, some endangered while trying to balance the need to educate the public about the wonders of amazing ecosystems found within the park. There are few options to tour this pictorial encyclopedia of wildlife- a jeep safari may be the fastest and convenient way for some, while there are elephant rides organized by the authorities. The elephant rides commence from nearby Mathanguri and can last up to 2 to 3 hours. It is indeed an enthralling experience as the elephant rides take visitors to areas inaccessible to the vehicle. Another leisurely way to travel and watch the wildlife in this green sanctuary is to enjoy a relaxing boat ride down the scenic Manas River, with the Himalayan backdrop.

The core area of 360 sq km wildlife sanctuary is brimming with the finest wildlife and rich dense and diverse flora as the home to the grassland and forest biomes. The tour within this deep forests will be a memorable experience for avid bird watchers, botany and zoology enthusiasts. Quality binoculars are the (only) must-have accessory while walking through this green heaven. Manas National Park also serves the only known habitat for some rare and endangered species such as the Pygmy Hog and Golden Langur, among other exotic species. As a reserve for tigers and elephants, tourists can expect to see the majestic creatures though it is always tricky to spot the striped cats. There are other varied wild animals roaming freely and easily spotted such as the wild deer, rhinoceros, leopards, or even blank panthers that are rarely seen elsewhere.

Home to mixed deciduous vegetation, the majority of the landscape is made up of small pastures spread throughout the dense forested foothills. The main types of vegetation found here are the various alluvial semi-evergreen forests, woodland and grasslands in different sections of the park and the most commonly found is a mix of dry and moist deciduous forests. Over 500 species of plants have been recorded in this green paradise.

This place is a bird watcher’s paradise because various bird species – resident and migratory- call this forested tour spot their home. The commonly spotted ones include bulbuls, giant hornbills and jungle fowls among many more.

Majuli Island A multitude of Satras, set in an expanse of land amidst the dynamic Brahmaputra. South Asia’s biggest freshwater island, Majuli Island is a tropical blend of culture, tradition, and religion. It is known as the cradle and cultural capital of t...