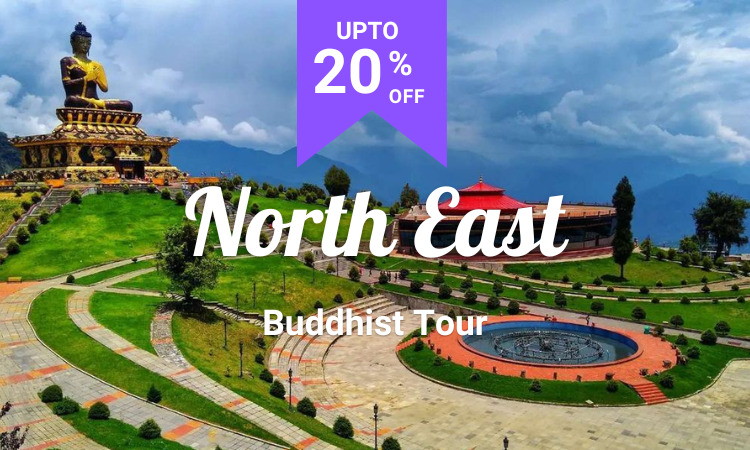 Lumbini in Nepal is where the Buddha was born but it was India where he achieved enlightenment and started preaching. In recent times interest has been growing in pilgrimage to the places where the Buddha lived and taught in India, especially the East and North-east. Buddhist tours to India and Buddhist tours in the northeast are growing in popularity. Join our Buddhist North-east India tour for a wonderful, soul-satisfying pilgrimage.

Our Buddhist pilgrimage of northeast India takes all of 14 days and 13 nights, each one highly soul- satisfying and enjoyable as one travels across the landscape of India. This Buddhist pilgrimage in India takes guests in absolute comfort and safety to the most important places starting from Delhi. Of specific interest to followers of Buddha are Sarnath where the enlightened one first started preaching to the public, Vulture Peak where the Buddha retreated for meditation, Saptaparni Cave where the first Buddhist council took place, Nalanda where students from all over the world studied at the University and others dotted across the landscape of the Northeast. Let’s get started by giving you an idea of the itinerary.

Pilgrims arrive in Delhi and are welcomed by our tour representative. They are shown to their hotel rooms and formalities are completed. Guests are free to spend the day exploring Delhi and its Red Fort, Qutub Minar, Humayun’s Tomb, Bahai Lotus Temple or just go shopping in Chandni Chowk.

A delicious North Indian breakfast is followed by a drive to Agra where everyone checks into their rooms and then we set out to admire the beautiful Taj Mahal. One of the seven wonders of the world, the Taj is a beautiful and eternal monument to love. One can go on to Fatehpur Sikri, the city created by Emperor Akbar, or explore Agra, buy pethas, the sweet confection made of gourd and sugar, and buy leather and brass articles and dine on famous Agra street food.

Enjoy a delightful Agra breakfast, board the bus for the return drive to Delhi airport where everyone gets on the flight to Varanasi, one of the oldest living cities in the world and a holy Hindu pilgrimage spot as well. It is of equal importance to Buddhists because this is where Buddha is believed to have delivered his first sermon. The group checks into a hotel to freshen up and everyone sets out to the Ghats on the banks of the River Ganga and enjoys a wonderful view of the holy Ganga Aarti which is a spiritually elevating sight.

Devotees rise early, enjoy a hearty breakfast and get together for local sightseeing to the famed Kashi Vishwanath Temple, which is one of the 12 Jyotirlingas in India. Then we go to the Bharat Mata temple, perhaps the only one of its kind where Mother India is worshipped as a deity. Then the coach takes the group to Sarnath, about 13 km away, northeast of the city where the Ganga meets the Varuna River. The river park is where the Buddha first started preaching the path of dharma to those who would listen. Return to the Hotel for the night and spend the evening in the bylanes of Varanasi, perhaps buy a Banarasi Silk Saree for which the city is globally famous.

Today is the most important day as the group sets out on the 255 km drive to Bodhgaya, a UNESCO World Heritage site. Bodhgaya is where the Buddha attained enlightenment under the holy Bodhi tree, the descendent of which still stands in the Mahabodhi Temple complex. It is about 12 km from Gaya city and after paying respects to the Lord, everyone sets out to visit other attractions. There is a beautiful Thai temple, Lotus Pond, and the Museum with relics from the past pointing to the glorious days of Buddhism.

After a delightful breakfast, the group gets into air-conditioned cars for the drive to Patna which will take all of four hours, interspersed with stops at places of interest on the way. The first stop is at Nalanda. Nalanda was an international University for 800 years and it remained active till the 12th century. In its heyday, it has 2000 teachers and 10000 students, a testimony to how large it was and how famed it was as students from China, Korea, Japan, Turkey, and Southeast Asia traveled to study here among whom Xuanzang became famous because he returned to China and translated the holy book into the Chinese language. The next stop is Rajgir which is of great importance because of its connection with the Buddhist religion. Pilgrims visit the Vishwa Shanti Stupa on Ratnagiri Hill, which shows the four stages of Buddha’s life depicted in the form of four golden statues. Built by a Japanese monk in 1969, it is the highest-standing peace pagoda. The other places we visit are the Ajatshatru Fort, Bimbisara Jail and Cyclopean walls all of them built during the Mauryan Empire reign. Another important spot is Venu Vana or bamboo grove that was gifted by Bimbisara to Lord Buddha and became his favorite place of retreat.

We then drive on to Patna, check into our rooms, and relax.

Rise early, have breakfast, and then drive to the airport for the flight to Kolkata where guests check into their rooms and relax for the day or go sightseeing the famous Museums and some haunted places.

Get up and enjoy breakfast, go sightseeing to the St Paul’s Cathedral, the Indian Museum, and the Victoria Memorial after which it is time for lunch and then the train ride to Darjeeling.

Rise early and set out to Tiger Hill to watch the sunrise. After breakfast, everyone sets out for a local sightseeing trip to the Ghoom Monastery, Batasia Loop, and others followed by a drive to the tea plantations and Japanese temple.

This is going to be a different day as we set out after breakfast for the drive to Kalimpong which is at a height of 4100 feet. Freshen up and visit Deolo Hills, Golf Garden, Durpin Dara Hill and then relax or do some more leisurely sauntering.

It is an early morning drive to Gangtok and checks into a hotel with free time for the rest of the day.

Today it is time to go sightseeing in Gangtok, to the Rumtek Monastery, Droul Chorthen, Deer Park, and Enchey Monastery, all of which are of interest to Buddhists. Then the pilgrims are free to spend the day as they see fit.

After breakfast the group boards cars to drive to Bagdogra and board a flight to Kolkata where the Northeast Buddhist tour of India ends with a fond farewell by the guide.

Your exciting Holidays Tour Packages is just a click away,please submit the form and let our expert design the package for you!

I had the opoortunity of travelling and exploring north east india with the seven sisters company. they were very courteous and helpful from the start. we also got to see all the places we wished to travel to. very happy with the services.

Visiting north east india is now made easier and more comfortable than ever. i booked my travel package with seven sisters at the recommendation of my friend. travelled to meghalaya, assam and tripura. very satisfied with the services and will definitely book again.

Thank you the seven sisters for making my honeymoon trip to gangtok a super memorable one. we also loved our magical visit to Kaziranga and dawki river. it was amazing. keep up the good work