The Brahmaputra is one of the main rivers of the Indian sub-continent that is the lifeline of northeast India and its neighbor Bangladesh. Surprisingly, this river means the son of Brahma, the Hindu god of creation-originates somewhere in southwestern Tibet near the celestial abode of the Hindu mighty lord-Shiva-Kailash Mansarovar. It is named as Yarlung Tsangpo river in its area of origin. This mighty and furious river begins its journey as a trickle out of the perpetual glaciers of Kailash-Manasarovar. The journey of this river is very long and it covers around 1800 miles from its origin to its meetings with the Indian Ocean. 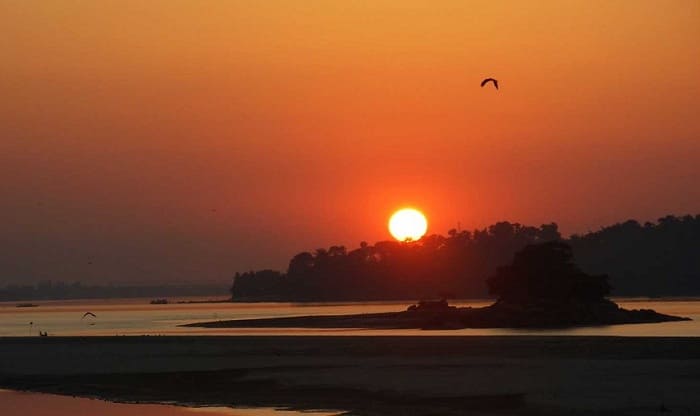 It originates 60 miles South-east of Kailash in the Chemayungdung ranges. This area is topographically very difficult to access and few people on earth have seen the source of this mighty river. The river runs 700 miles in Tibet before it enters India. Apparently, the source of this mighty river looks like a horse’s mouth at an altitude of 16800 feet. This source which is extremely remote was discovered by Robert Drummond, Henry Hudson, Edmund Smyth, and Thomas Webber. This source of a mighty river is home to wild yaks drones-extremely rare animals on earth and can be seen on these great mountains.

This river changes its size shape and color during this long journey to the Indian Ocean due to its various tributaries. It travels through glaciers, gorges, and plains valleys in beautiful Tibet where it has become part of their lifestyle. It runs through disputed Indo-China borders and enters India at Arunachal Pradesh as Dihang. It is the lifeline of the inhabitants of this area. Its water brings a lot of minerals helping in creating fertile land. It irrigates the valleys of Assam and moves to Bangladesh where it is named Jamuna. Finally, it joins the famous Ganga and creates one of the most beautiful deltas on earth-Sunderbans. It is the main river of India’s famous rhino land-Kaziranga park. This park is flooded every monsoon by this river and the flood waters bring soil that is suitable for creating the elephant grass habitat of Kaziranga. The river is held pious by its habitants.

This amazing river flooded Bangladesh almost every year and this river system changes its course every year creating and destroying land in this process. So it is the long journey of the mighty Brahmaputra that originates in glacial waters near Kailash in Tibet and ends near the Bay of Bengal meeting the Indian Ocean. This is a great journey of a great river that has cultural, economic, geographical, political, and other values in this complex part of planet earth.

This river is in news recently as Tibet in China-the land of its origin has confirmed the long-time Indian belief that China is building a dam on this mighty river. China is building Zangmu Dam to tame this source of water for India and Bangladesh. These nations have expressed their fears about the violation of their rights over water in accordance with international conventions and treaties. China however has assured that there would be no violation of the concerned countries’ water rights. Let us hope that the assurance is not merely false propaganda and that the glory of this mighty river is not infringed.

Nagaland is a vibrant hill state Located in the extreme North Eastern End of India. It offers rich incomparable traditional and cultural heritage. It is the land of the Naga tribes who still practice and cherish their rich cultural traditions and customs in the grandest way. The Naga tribes form a major portion of the Nagaland community. This tribal community is not restricted to Nagaland o...