The two most plausible reasons as to why animal worship is so popular are: Numerous clans have animals as their totems and therefore, they refrain from killing, eating or injuring that particular animal. People have a sympathetic feeling towards life and therefore avoid slaughtering them. 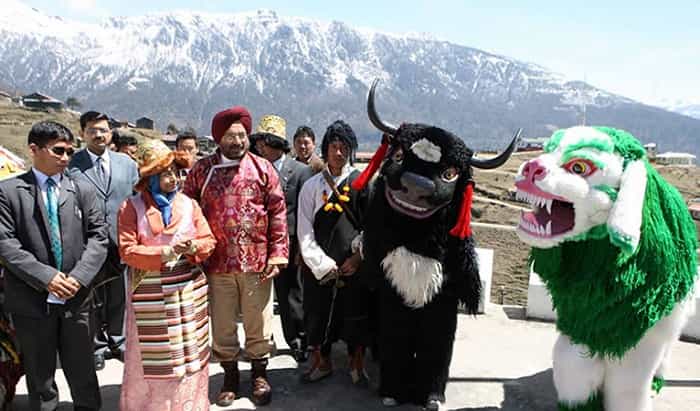 The human attachment to life is perceived in the folktales. A famous folklore that is deliberately narrated to children to pass on to them the respect for life goes as:

Once a king requested a falcon to spare the life of a dove and to compensate for that, the king offered the falcon flesh from his own body. When his flesh seems inadequate, the king gave his entire body to strike the balance.

In Hindu mythology, various animals are associated with Gods and Goddesses and are held sacred. Particular days are dedicated to the worship of certain animals. Horses are revered by a race of warriors. They are believed to be lucky and an extremely pure animal. When a cooking vessel has become anyway defiled, the common way of purifying it is to give it to a horse to smell it. Hindus believe that the white horse, called Kalki, which is the tenth incarnation of lord Vishnu is yet to come. Folktales are embedded with motifs of lions and tigers. The famous tale of Androcles and the lion is still afresh in our minds. There are motifs of Royal princes killing enemies riding on lion backs. The Garos and Nagas believe that a ware-tiger, which can be transformed into human beings at its will, is still prevalent. Hindus show extreme reverence to cows. However, history reveals that earlier cows were sacrificed and their meat eaten. The black buck or the Indian antelope is the holy animal of the indo Aryans. The bull as a symbol of virility, strength and courage come in the form of Nandi and is associated with lord Shiva. Cats are held sacred both among Hindus and Muslims, and killing a cat can be as sinful as slaughtering a cow. The Hindus also revere monkeys and relate it to lord Hanuman. Dogs, mice, bats, bison, tigers and squirrels have their own special reverence in Hindu mythology. Many a times, we see that clay or marble images of certain animals are placed below a tree. People say that sometimes people make wishes and promise certain animals to be sacrificed as an offering. However, when the animal could not be procured for sacrifice, an image of it in dough, wax or stone was prepared and offered as a substitute. While some people say that these animals refer to the equipage (sawari) of the gods. The essence of totemism is a confessed belief in animal descent, a name declaring that descent and some sacredness attached to the animal or other fancied. The jaitwas of Rajputana trace their descent from monkeys and confirm it by alleging that the spine of their princes to be elongated like a tail.

The Monpas of Arunachal Pradesh held many dances throughout the year where much importance is given on yaks and lions. The yak plays a prominent major role in the economy and prosperity of the Monpas. It is believed that a man named Thegpagali discovered yak hundreds of years ago. The yak dance thanks the man and narrates the story. Lion dance depicts the Monpa belief that happiness and harmony can come to this world when all people ensure peaceful cohabitation with animals. The story behind this dance goes as once saint Tentelling meditated on mount Gangrikarpo for three consecutive years without food or drink. Two snow lions that live in the Himalayas were moved at this devotion of the saint. So, they came down to offer him milk for survival; eventually, they became good friends. When people heard of this marvelous relationship, they went to witness it and seeing such love, they started dancing. This is since what the lion dance of Arunachal signifies.