Nagaland is a vibrant hill state Located in the extreme North Eastern End of India. It offers rich incomparable traditional and cultural heritage. It is the land of the Naga tribes who still practice and cherish their rich cultural traditions and customs in the grandest way.

The Naga tribes form a major portion of the Nagaland community. This tribal community is not restricted to Nagaland only but also dwells in various parts of the surrounding seven sister states, majorly Assam and Manipur. There are sixteen main groups of the Naga tribes which are: Pochury, Rengma, Angami, Ao, Chakhesang, Chang, Sangtam, Dimasa Kachari, Khiamniungan, Konyak, Sumi, Phom, Zeliang, Yimchunger, Kuki and Lotha tribe. The largest among these are the Konyaks, Angamis, Aos, Lothas, and Sumis. Apart from these there are several smaller tribes as well. These tribes belong to the Mongoloid race which is evident from their physical appearance.

Every Naga tribe is different from the other in respect of their traditions, customs, language and dresses. The costumes of the different tribes are very different from each other and are very colourful. Colourful jewellery is also an integral part of the whole attire. Traditional songs and dance forms is the most distinctive part of the rich Naga culture and are generally performed in the Festivals of the Naga tribes. The Nagas have been able to preserve their rich culture, identity, customs and traditions through these festivals. These festivals are considered to be sacred by the Naga tribes and participating in them is compulsory.

Some of the Important Festivals Celebrated are: 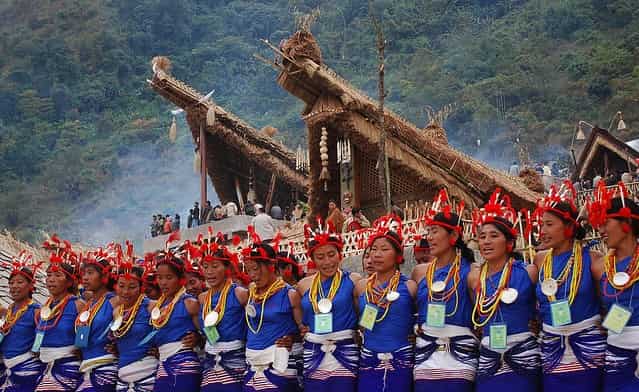 One of the most popular and grandest of the festivals is the Nazu festival of the Pochury tribe which is celebrated for 10 days in the month of February. One of the special features of this festival is the Khupielilie dance by the women of the Pochury tribe while wearing the traditional dress Ascunyi which is a very complex and beautiful dress very well adorned with beautiful bangles, armlets, ornaments, a head ribbon and a beautiful necklace.

The government of Nagaland launched The Hornbill Festival in December, 2010 to promote the cultural heritage of the state. It is a weeklong festival held from 1st to 7th December every year in the Naga heritage village. All the Naga tribes participate in this festival which is an extravagant display of Nagaland’s rich cultural heritage in all its ethnicity, diversity and grandeur. It is a means for the visitors to understand the Naga people and their culture with an unforgettable experience.

Glimpses of the Hornbill Festival

The Naga tribes along with the rich cultural heritage which can be seen in the custom, traditions and festivals of Nagaland is a rare spectacle to watch in today’s urbanized world. For the people who want to get away from the hustle and bustle of the city streets and indulge their senses in the beauty of one of the most unexplored and culturally rich places in India; Nagaland is the place to be.